Egyptian star Mohamed Salah has maintained his scoring form in the Champions League after his goal for Liverpool during the 2-0 win over Rangers this week. In the battle of two British teams, Salah scored the second goal to seal the points for the Reds. 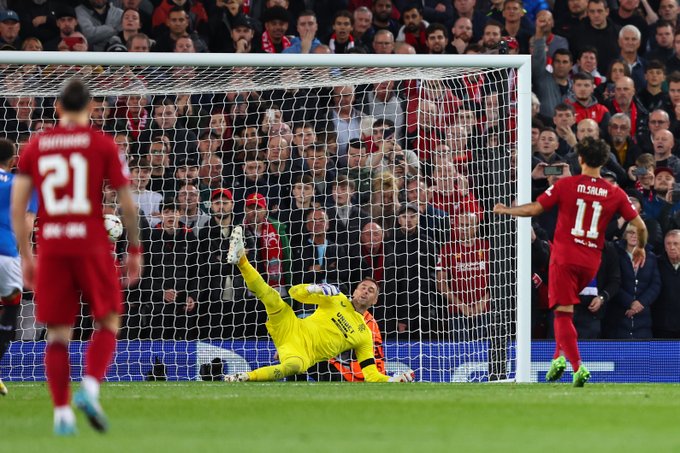 Salah is a key player for Liverpool, but he has not been able to reach the heights of last season. The Egyptian international has struggled to find the back of the net on a consistent basis this season. He started the season with a goal during the 3-1 win over Premier League champions Manchester City in the Community Shield before the Ex-AS Roma and FC Basel attacker scored one of the goals in the 2-2 draw at newly promoted team Fulham on the opening weekend of the Premier League. Salah has failed to score in the league since the Fulham game in August. In total, he has scored just three times in ten Premier League and Champions League games.

In the first Champions League game for Liverpool this season, Salah failed to score as the Reds were beaten 4-1 by Italian Serie A outfit Napoli. Polish star Piotr Zelinksi scored twice for Napoli during the game. The Liverpool goal during the game was scored by Colombian attacker Luis Diaz.

Liverpool recovered from the big defeat at the hands of Napoli to beat Dutch side Ajax Amsterdam 2-1 at home for their first Champions League win of the season. Salah scored the first goal of the game in the first half before it was cancelled out by the Ajax goal from Mohammed Kudus. Liverpool left it late to secure the points thanks to the header from Joel Matip.

Goals from Alexander-Arnold and Salah led Liverpool to a 2-0 win over Rangers. It made it two Champions League wins in three games.